7 Days to Die (7D2D) is an open world, massive multiplayer apocalyptic zombie game taking a stab at redefining the crafting aspect of open 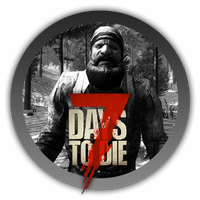 world game play.  Set in a brutally unforgiving post-apocalyptic world overrun by the undead, 7D2D offers a wide variety of combined gaming types including a first person shooter, defense base building, role-playing adventures all wrapped up in a survival horror theme.

With over 1.5 million copies sold on PC (digital download), 7 Days to Die has redefined the survival genre, with unrivaled crafting and world-building content.  This sandbox offers combat, looting, mining, exploration, and most of all, crafting.  With such a wide variety of options to be successful in such a world, 7D2D compells gamers to truly use their engineering and wit to keep their character alive.

7 Days to Die is played in a random generated world.  Private hosted servers have the capability to introduce preset worlds such as Navezgane, Arizona.  This game is focused on the survival of the human through their ability to craft objects in such a way that allows for the survivor to survive the night.  During the day Zombies are weaker and less threatening.  However over time, Zombies become more aggressive and at night, they are on the hunt to destroy anything alive.  The world’s physics introduces the capability for anything in the world to be mold-able and destructible.  With such a world, the capability to build any shelter, structure, or house is attainable.  Zombies in turn have the ability to enter, break and destroy anything in their path.  Multiplayer gameplay is done via privately hosted fan servers whereby players can easily interact with each other.

For any fan coming from some of the popular massive multiplayer, open world Zombie Apocalyptic games such as H1Z1 and DayZ, there is an immediate letdown to the player as the graphics are not in the same ballpark as expected.  It is apparent very quickly that searching for loot and crafting items is an immediate need.  The movement is generally smooth, however animals and zombies can at times move a bit unrealistic to the rest of the world.

Because the world is so malleable, there is a sense that anything is possible.  It does lend to the idea that while brute force can keep one alive, the ability to create and forge objects that can be used for survival, is extremely appealing for many people.  Players have a few options of the type of gamestyle they would like to play.  These two modes are:

Creative Mode – In this mode, the Zombie hordes are removed and provides the player the capability of truly experimenting with the creative nature of building within the world they reside.  This is considered by some as a “Minecraft-style” gaming experience that forces a great amount of experimentation and creativity.

Survival Mode – The survival mode is broken down into two types, Randomly Generated and Standard.  This mode unleashes Zombies.  Between the continual threats of Zombie Hordes and even Humans, this mode requires players to leverage every skill, sense in order to stay alive.

The three major aspects of the game that are the most attractive to players are:

If the future of this game begins to add the great aspects of what are successful in other open world games such as H1Z1 and DayZ, this game has the potential to beat them all. Graphics and gameplay development is a must.  Additional support for those hosting private servers along with mods, plugins and other enhancements that enrich gameplay will be welcomed additions to this game.

This game really is a demonstration of Minecraft meeting DayZ in an Open World Survival Horror.  Minecraft Fans will definitely praise this game with DayZ fans being less than impressed.  For those that generally enjoy a simple, creative and fun experience, 7D2D will definitely be able to deliver.  This game has a lot of potential.  It will be extremely exciting to see where the development this game goes.